(Los Angeles, April 2, 2014) – The La Cienega Design Quarter is proud to announce that its sixth LEGENDS event has drawn the unprecedented participation of 11 of the most prominent design magazines in the United States, Europe and California. The LCDQ board is also pleased to announce that Fashion icon Diane von Furstenberg and esteemed New York interior designer David Kleinberg will lead the roster of LEGENDS 2014 window designers, which is expected to number more than 40.

One of the most anticipated design events in the United States, LEGENDS is a 3-day celebration of design in May that brings together VIPs and tastemakers from the worlds of interior design, decor, art, fashion and architecture for receptions, keynote panel discussions, cocktail parties, exhibitions, book signings, personal appearances and special events. The dates for LEGENDS are May 7-9, 2014.

This year’s LEGENDS theme – Novel Interiors: Storytelling by Design – is already resonating through the design community. The cornerstone of LEGENDS is the windows. Top designers are being invited to transform the windows of the LCDQ members’ storefronts inspired by the theme of LEGENDS – books and novels. Von Furstenberg has chosen “Out of Africa” as the theme for her window. Designer Timothy Corrigan’s window at Fuller & Roberts will be themed to “Valley of the Dolls,” Jeffrey Hitchcock – “Fahrenheit 451” at Downtown, Sheldon Harte of Harte Brownlee – “The Invisible Man” at Mecox, and architect Paul Williger – Edith Wharton’s “The House of Mirth” at Renaissance Design Studio. There are many surprises to come.

Kleinberg, a New York designer of 30 years, graciously accepted the Therien showroom’s invitation to design their large picture window, which has a prominent spot in the heart of the Quarter. “There is a unique irreverence to period in Los Angeles and especially in the La Cienega Design Quarter that makes the mix of shops and their selections more relaxed and open-minded,” he said.

It is rare to have so many renowned design magazines together at one event. National and international media sponsors for LEGENDS 2014 are Architectural Digest, DomaineHome.com, Elle Decor, The Hollywood Reporter, House Beautiful, Luxe Interiors + Design, Milieu, Objekt, Traditional Home and Veranda. Regional publications include C magazine and California Homes. LEGENDs presenting sponsors are 1stdibs and Coldwell Banker International Previews, along with corporate sponsors One Kings Lane and Benjamin Moore.

In its sixth consecutive year, LEGENDS has attracted over 12,000 attendees and garnered 100 million+ media impressions. The parties, lunches and programs are a huge draw, with as many as 800 people at the kick-off party in previous years, full capacity of 200-300 people at the lunches, and capacity audiences of 100-200 at the programs held in the shops and showrooms on La Cienega and Melrose. LEGENDS is the largest design event of its kind on the West Coast, and many in the design trade say that it is the most significant design event on the national calendar.

The invitation-only Gala on Wednesday, May 7, sponsored by 1stdibs and Coldwell Banker Previews International, leads off two days of discussions, education and entertainment. The 5 signature social events – the Gala on May 7, Elle Decor Power Lunch and Architectural Digest Tribute Party on Thursday, May 8, and the Veranda Lunch and Veranda Closing Party on Friday, May 9 – are by invitation only. However, VIP passholders will have access to those events as well as guaranteed seating at the keynote panels.

The La Cienega Design Quarter was founded in 2008 to promote the burgeoning antiques and design neighborhood on one of Los Angeles’ oldest thoroughfares. Since the 1950’s, La Cienega Boulevard has been the leading destination for interior design, shopped by icons like William Haines, Elsie de Wolfe, Tony Duquette, Frances Elkins, Chet Chidester, Michael Taylor and Kalef Alaton. Today La Cienega (running north south through Los Angeles and West Hollywood) and Melrose (an East-West street) continue to be the leading destination as top designers, celebrities and selective shoppers nationwide source the most unique design in the world from the shops, galleries and showrooms of the LCDQ.

Click here for a complete schedule of events during LEGENDS 2014, names of window designers and program highlights.

Click here for a list of participating window designers and the books they have chosen as their themes.

High resolution images from previous years LEGENDS events are available upon request. Interviews with board members and sponsors require at least 24 hours’ notice. 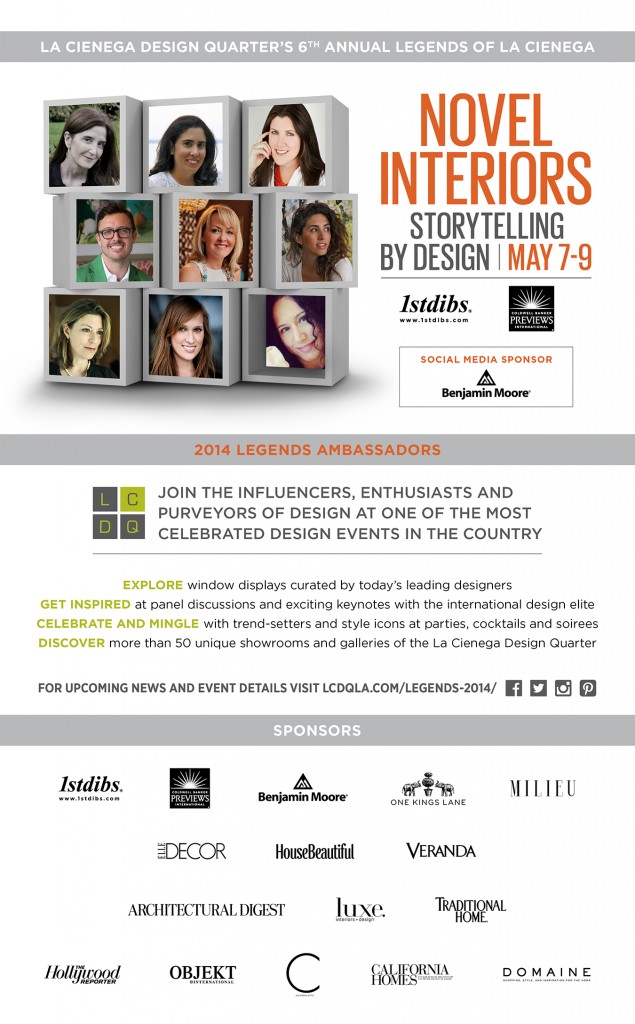