So often we don’t know what treasures we have until they are gone, and so, for the first time since its founding in 2008, the LCDQ has decided to acknowledge living leaders of the design world and salute them as Living Legends.

The first honorees are Bunny Williams and Suzanne Rheinstein, one East Coast and the other West Coast designers who are much loved and much emulated.

Both Bunny and Suzanne, as they are affectionately referred to by many, have, over the past four decades, led by example, sharing their ideas for a gracious way of living and designing with hundreds of thousands of design lovers via the books they have authored and the interviews they have given.

The LCDQ is proud to honor them both at the Opening Party for LEGENDS 2019 on Tuesday, May 7, open only to those who have purchased a VIP registration.

Bunny and Suzanne also will have one-on-one interviews during LEGENDS with two esteemed national design editors. Further information will be provided via the LEGENDS 2019 schedule. 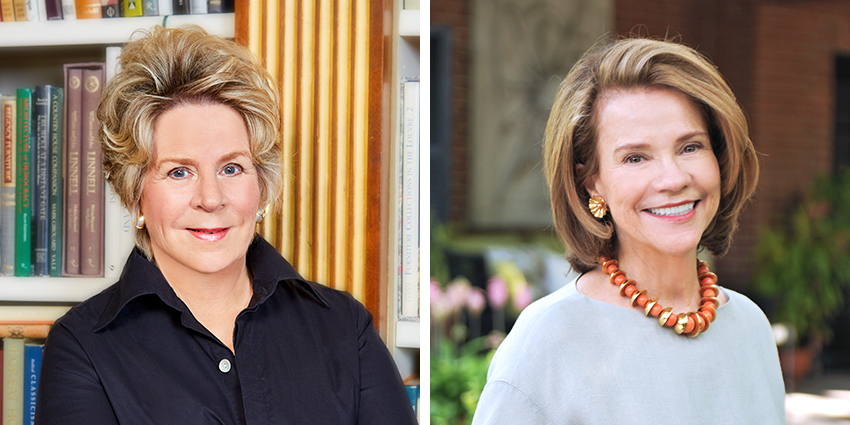 Bunny Williams has built a legacy of superior design over the past three decades through her firm, Bunny Williams Interior Design, which is widely recognized and championed as an industry leader.

Renowned for balancing refined beauty with welcoming livable appeal, Bunny is also an accomplished businesswoman, entrepreneur, author, and philanthropist. A lover of dogs, gardens, and china, Bunny’s knowledge and expertise is on par with her enjoyment of life. Her eponymous firm — launched in 1988 following a 22-year apprenticeship with the esteemed Parish-Hadley Associates — has wrought its own indelible imprint and legacy.

The creation of delightful rooms is Bunny’s passion, and evidence of her passion can be found across the United States and abroad. Bunny’s own houses and her long career have provided ample material and inspiration for six books to date, and she is a sought-after speaker and mentor on design, decoration, gardening, and entertaining.

Bunny grew up in the countryside near Charlottesville, Virginia. Her parents encouraged her passion for the arts and led her to Garland Junior College in Boston, where she studied interior design. A watershed moment at age 15 was visiting the Dorothy Draper-decorated Greenbrier Resort, which had a color palette unlike anything Bunny had ever seen. “It really opened my eyes and the lesson I learned was not to play it safe,” shares Bunny.

Upon moving to New York, Bunny worked at Stair & Co., an antiques gallery frequented by Sister Parish and Albert Hadley. Subsequently joined Parish-Hadley, Bunny says,. “I was honored to work there and was exposed to so much; their extraordinary projects and partnership, the design process, everything. By the time I left, I’d been the secretary, an assistant, and a buyer. I had the tools and experience to run my own enterprise, which I did — starting with three people working out of my guest bedroom!”

Fueled by her devotion to gardening, Bunny opened Treillage in 1991 along with her husband, the antiques dealer John Rosselli. An Upper East Side destination for the ultimate in home and garden for 25 years, “Treillage was something entirely new, but all good things come to an end,” says the veteran designer, who closed it several years ago and launched Bunny Williams Home, a complete home-furnishings company.

Her philanthropic work is boundless. Bunny has chaired the Kips Bay Boys & Girls Club Decorator Show House since 2012, and she has been recognized for her charitable support of Housings Works, the New York Landmarks Conservancy, and Women’s Support Services in Sharon, CT, among other charities.

Not one to rest on accolades and honors, Bunny keeps her eye on what’s next. “The firm is taking on an exciting new dimension with Elizabeth Swartz as my partner,” says Bunny. “Together, we are all part of a greater legacy that branches out from Parish-Hadley and it feels very relevant in our fast-paced world. She completes my vision and takes it a step further: We work hard and have fun in the process.” Williams’ ability to mentor yet another generation of talented designers firmly establishes her as one of the most important voices in the evolving history of design.

For 30 years, Suzanne was the owner of Hollyhock, the renowned shop filled with antique furniture and one of a kind decorative accessories which graced La Cienega Boulevard with its beautiful ivy covered facade in the 21st century. At Hollyhock, she regularly hosted book signing cocktails for designers who had just released coffee table books featuring their designs, and she always took pleasure in selecting unique window designers for the La Cienega Design Quarter’s annual LEGENDS event. She closed Hollyhock in 2018.

Born and reared in New Orleans, Suzanne has a deep appreciation for the traditions of that city. Her Southern sense of style and hospitality, the visual sophistication she acquired living on the East Coast and her appreciation for the relaxed lifestyle of Southern California have made her a sought-after talent.

Her best-selling first book, At Home: A Style for Today with Things from the Past, (Rizzoli, 2010) shares six homes that showcase her trademark elegant, livable style, including her own homes in Los Angeles and New York City. Her second book, Rooms for Living, (Rizzoli, 2015), offers a master class in gracious, harmonious living.

Suzanne, who designs the Suzanne Rheinstein*Hollyhock fabric collection and rug collection for Lee Jofa. Antique textiles from her personal collection provide the perfect foundation for her fresh and understated interpretations of centuries-old designs.

Gardens are a passion of Suzanne, who lives in one of Los Angeles’ oldest neighborhoods, Windsor Square. Among the charities that she has supported for many years are the Garden Conservancy and Friends of Robinson Gardens. Suzanne and Bunny both are on the National Advisory Committee for The Antiques & Garden Show of Nashville, an annual charity event whose purpose is to raise funds for enhancing and improving the lives of children and families in the greater Nashville area. With her late husband, Frederic Rheinstein, they supported LA Opera 90012, which every year provides free opera tickets to dozens of high school students who entered an essay contest.

Suzanne and her work have been featured in numerous regional and national lifestyle publications and blogs. She has been part of AD100 and Elle Decor’s A-List. She recently received the Legacy Award from the Institute of Classical Architecture, Southern California, and the NYSID Albert Hadley Lifetime Achievement Award.